The Staff of Garden of Destinies LARP would love to hear from players or potential players.

Let us know if you have any questions or concerns at: staff@gardenofdestinieslarp.com

You can also ask questions or discuss the game with other players on our Garden of Destinies Forum and our Discord Server. Please remember that official or pressing inquiries should be made via the forum or email.

Garden of Destinies LARP has seven full-time staff members. The majority of these are Directors, but there is also one Marshal. All of these folks work hard to make the game successful. 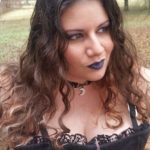 Rachael Cofield (they/them) – I attended my first LARP in 2009 and I’ve been hooked ever since. Being a queer geographer, I feel that there has been considerable overlap in my work as a scholar and my hobbies. I think LARPing can help people grow, opening their minds as they face new challenges and experiences. I’m dedicated to creating a LARP environment that is inclusive and sensitive to issues of the now and hope to continue facilitating LARP in a safe community for years to come. 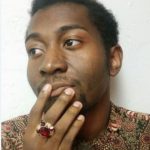 Tevin Williams (he/him) – I have been LARPing since 2012. My favorite thing about the game is the world-building. I really want the worlds I create to feel like living, breathing places. Also, thinking about how the politics of a made up place works is very fun. I guess that is why I study it in real life. Well, I study real-life politics not fantasy politics, not that I wouldn’t study fantasy politics if it paid money. I wonder if I could make that pay money…I need to write that down… 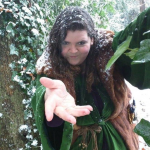 Merry Peterson (she/her) – I knew one day it would come to this. The sewing. The folk music. The body painting. Now I got a LARPing habit I can’t kick and the wardrobe to prove it. Guess I’m just a dame with a whimsical streak a mile wide and sass to boot. But I tell you what, it sure as hell is a fun ride… 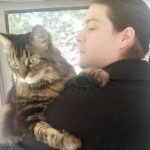 Tanner Rives (they/them) – I have been LARPing since the 20th century, starting at the wizened age of fifteen. I was an incredibly introverted teenager, and LARPing helped me come out of my shell and make friends that I will be glad to have for the rest of my life. Throughout the years LARP has been an important part of my life, not only because I found friends, but because I found my own talents as well. Taz (the mainecoon) is sadly not a director of GoDs. 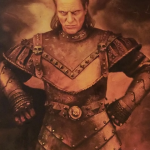 Frank Ortiz II (he/him) – Frank is our oldest staff member, Larping since the mid 16th century, he brings a fierceness that can only be brought on by Spiritual turmoil in the world….Though he may have been poisoned, shot, stabbed, hung, stretched, disemboweled, drawn and quartered he is always willing to go for a second round of trading hits. 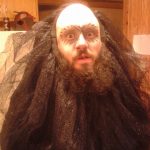 Donnie Baggett (he/him) – I was born on Tricon 3. As the fourth leader of the Intergalactic Principalities I daily meet people and even species entirely different from myself. To share this joy with the short lived humans of Earth, I descend from my throne several weekends each Earth “year” to share the experience of LARP. I delight in taking inspiration from the varied array of citizens of my vast fleet and far-reaching colonies. In thanks for this opportunity, I vow to conquer Earth last. 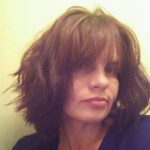 April Drake (she/her) – April has been LARPing since 1999 and has been staff for two other games. Currently she is in charge of the monster town for Gardens of Destinies LARP. She is immune to bribes however cold coffee drinks and cute unicorn things may get you killed faster.